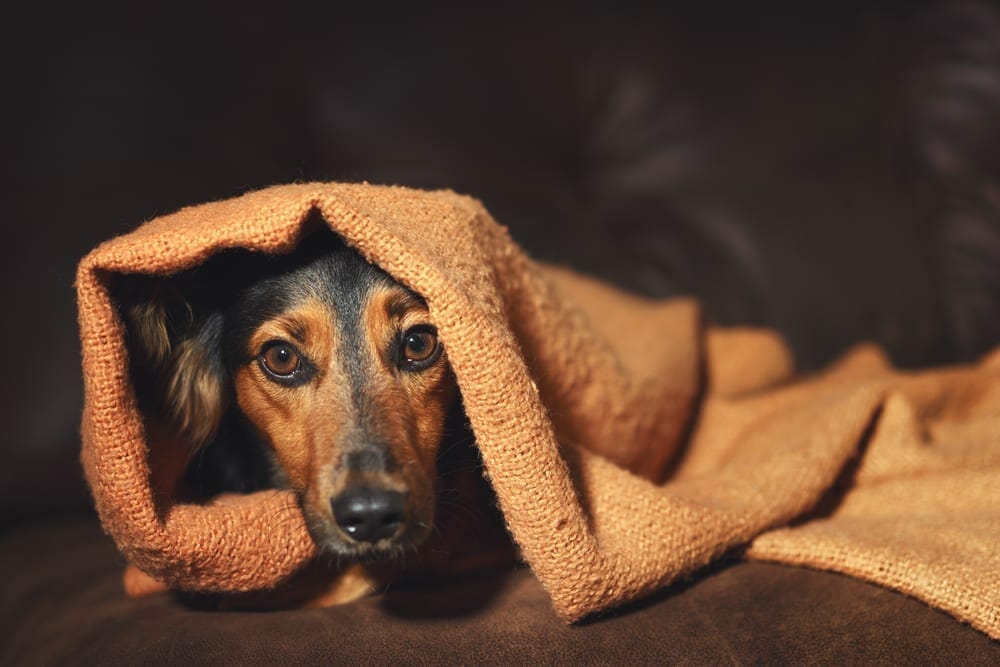 What’s That All About – Anxiety vs Fear

All dogs, and cats get scared sometimes. But what is the difference between anxiety and fear? Pet Insurance Australia investigates.

It’s a word that is often used by pet owners – anxiety. However, did you know there is a difference between a fear response and full-blown anxiety disorder?

It is very natural that most dogs become fearful when in certain situations such as;
• Dog fights
• Sudden and extremely loud noises
• A trip to the vet
• Car rides
• Being startled

So, when it the reaction normal and when is it not?

The first and most important aspect is noting how quickly your dog calms down. For example, if your dog is showing signs of fear but calms down pretty quickly, you can rest assure that this is a normal response to something that has given them a wee fright, or a situation that is making them feel uncomfortable. When anxiety is involved, your pet will show consistent symptoms for much longer.

Let’s imagine that Rover is terribly anxious of thunderstorms. A storm has just approached, and a loud clap of thunder has bellowed above. This message (and for thunderstorms the triggers could be the sudden drop in pressure or the sound of rain falling) then flies to your dog’s brain.

Now, in Rovers case he has been diagnosed with thunderstorm anxiety and his symptoms have already begun to kick in. He has a hugely over-reactive primitive brain that is set off when even the slightest hint of a thunderstorm approaches, sometimes even if it’s just a loud bang that sounds like a clap of thunder.

His ‘thinking’ part of the brain – the cortex – can’t settle the primitive brain. Research has even shown that dogs and cats suffering from anxiety disorders can have a damaged hippocampus due to all the surging hormones in the system. The hippocampus is responsible for converting short term memories into long term memories. So even if Rover survives this storm, doesn’t get hurt and creates a memory that there is no reason for the fear, his brain may not remember the situation…. meaning tomorrow’s storm will generate the same response.

A dog may have a fear response to the clap of thunder – a sudden jump or look a little afraid but will quickly settle down and realise there is nothing to fear. Just the same as if someone gave you a fright.

However, a dog suffering from an anxious disorder will more than often not, get worst each time. Will show consistent symptoms and will not easily settle down. For these dogs – seeking professional help is paramount.

It’s the same for cats. Many cats are not diagnosed with anxiety disorders however they can feel the exact same rate of anxiousness during certain situations. This is probably because cats will tend to hide, as dogs can become rather destructive during a highly charged anxious situation – think separation anxiety. Again, if you think your pet is suffering seek professional help. Your vet can help tailor a treatment program to help your beloved pet feel more safe and secure during these episodes.