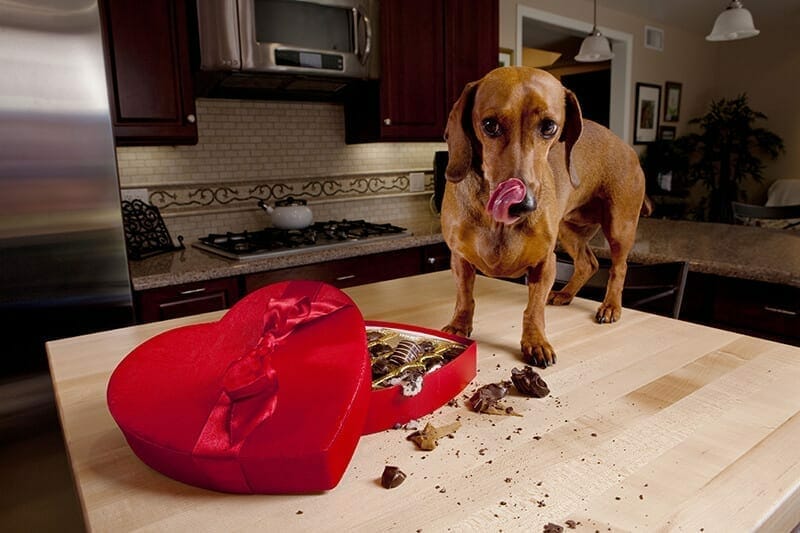 As the sweet smell of roses fills the air with the scent of love and anonymous cards fill the inboxes of work colleges, it’s that time of year when the romantics flex their muscles. Valentines Day.

However for our canine friends, this time of year can wreak havoc on their digestive tracts with the rate of chocolate poising skyrocketing around this romantic time of year.

“Chocolate can be very toxic to animals, in particular dogs,” Crighton says. “Many of them simply love a box of tasty chocolates, including ingesting the entire box along with the foil wrapping.”

It’s not only curious pups that can get into trouble with eating a box (or two) of chocolates. It is also not that uncommon to catch a sneaky cat having a lick or two of a chocolate covered treat.

“All dogs and cats, young and old, have a sensational sense of smell,” Crighton says. “So hiding that delectable box of choccies behind the sofa cushion will not be enough to deter an eager pet to investigate.”

The advice is simple. Just as you would with Paracetamol and children, keep your chocolates up and out of reach from you pets.

“It is much better to be safe than sorry,” Crighton says. “Chocolate poisoning can be lethal.”

In 2015 PIA had 341 claims for poisoning and toxicity. During the months of February and March the total number of toxicity claims was 42.

Chocolate is made from roasting the seeds of the Theobroma Cacao, which contain two toxic properties for animals; caffeine and theobromine. Ingesting these properties can be fatal for a companion animal.

“Baking or compound chocolate seems to be the worst as it contains more caffeine and theobromine, however even milk chocolate can cause severe toxicity,” Crighton warns. “So also be aware of chocolate cakes and other sweet treats.”

Symptom of chocolate poising include:

If you suspect your pet has ingested chocolate, seek veterinary advice immediately.

“The fact is; companion animals die from ingesting chocolate, and owners need to be diligent, particularly with dogs as they are natural scavengers.” Crighton says.