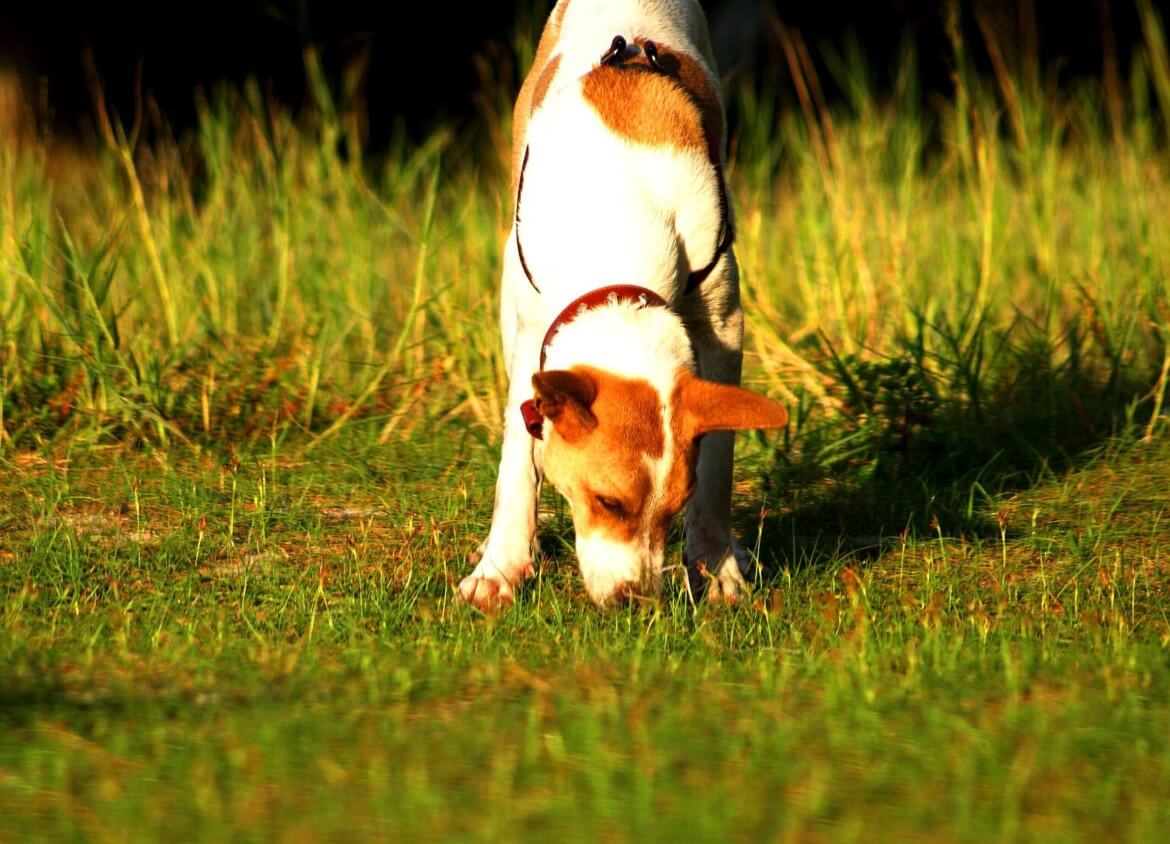 Grass Eating – What’s it all about?

If you are anything like most pet owners, the sight of your beloved companion animal munching on grass is a normal sight. But what is it all about and could it be an indication of something else going on? Nadia Crighton investigates.

It’s no uncommon notion that pets, some more than others, simply love eating grass. My dog is actually nicknamed ‘cow’. He eats so much grass that sometimes it is like watching a cow grazing in the paddocks. The older he gets, the more he seems to love to indulge in eating certain grasses and oddly enough he doesn’t vomit it back up like most dogs do. This has prompted me to look at the possibly reasons why dogs, and some cats, like eating grass.

Do some grasses contain beneficial nutrients for our pets? If so what? And what can we discover about our pets when they start eating grass?

There are many theories when it comes to dogs and cats and their grass eating habits. But here are a few that we have managed to understand.

Firstly if your dog has started to recently eat grass then it is strongly advised that you head off to your local veterinarian to rule out any problems. It has been said that some dogs may start to eat grass if they are suffering from digestive problems or inflammation. Some dogs may also start to eat grass during times of anxiety or stress. So a routine check is advised to ensure nothing else is going on. It has been suggested that dogs suffering from reflux may be more inclined to indulge in the tasty green morsels to ease their pain. Before you head off to the vet, arm yourself with enough information as possible about your dog and the times when they eat grass. Are they stressed? Does it make them sick? What do they do before they eat the grass (are they licking their lips constantly or sticking out their necks), what type of grasses are they going for? Is the grass treated with pesticides or fertilizers or be possibly contaminated with parasites?

If we consider that dogs are natural scavengers, and are also hunters, we can easily see how eating grass could have been a way of stocking up on nutrients when food was scarce. Some believe that grass eating is actually an ancestral habit that has been passed down for many years and that it is a natural and common behaviour. For these dogs, that are simply acting out a natural scavenge, it is fine to allow them to graze on grass occasionally. If it is not causing any problems (like continuous vomiting or worm infestation) and you know the grass is herbicide and pesticide free, then there really is no harm in allowing this behaviour. The fact is that some dogs, and cats, eat grass because they want to.

Many have said throughout the years that dogs and cats eat grass to help them vomit. However this might not be the case…well it hasn’t been proven so far anyway. The 2008 Applied Animal Behaviour study into the characterisation of plant eating in dogs, revealed what all dog owners know…that grass was the most commonly eaten plant. In fact; out of all the dogs surveyed 79% noted their dogs frequently ate grass. Interestingly only nine percent were reported to be seemingly ill before they ingested the plant and only 22% reported vomiting afterwards. It also showed that age seemed to play a part in the vomiting of the grass. The younger the dog, the less likely it was to vomit after eating grass. The findings supported; that plant eating is a normal behaviour of domestic dogs.

This, also doesn’t rule out that perhaps dogs do eat grass in order to feel better. It is widely known amongst owners that dogs, and cats, will seemingly hunt out grass to in times of illness. The study did reveal that dogs that did seem ill beforehand were more likely to vomit after ingesting the grass. For dog owners we know that for some reason or another, grass seems to ease their pain. The fact is there is no definite answer as to why our dogs and cats eat grass and if, at all, it does help them feel better. The science is still out on this topic.

There is much debate whether diet plays a role in the amount and type of grass that pets eat. In a **University of New England research test, a selection of dog who were fed a standard diet, and another selection were fed a Fructooligosaccharides (FOS) diet. FOS are short and medium chain sugar molecules that are commonly found in grass. The study revealed that dogs on the standard diet spent significantly more time eating grass than those on the FOS diet. However, those on the standard diet had much better stools than the loose stools of those on a high FOS diet. This has lead the researchers to conclude that dogs do not use grass to ‘self medicate’ a gastrointestinal upset. However they also noted that this does not suggest that grass cannot help with other gastrointestinal upsets, such as constipation or nausea. Interestingly out of the 374 grass-eating episodes only TWO ended in vomiting. Again the science is still out there on why our dogs actually eat grass and if there is any real medical reasons why.
**Reduction in grass eating behaviours in the domestic dog, Canis familiaris, in response to a mild gastrointestinal disturbance – ResearchGate. Available from: http://www.researchgate.net

When is eating grass NOT OK?

Grass eating is not bad for your dog (as such). However if your dog is repeatedly vomiting after eating the grass then you need to look at training this behaviour out of your dog. Constant vomiting, as with humans, is not good for your health or teeth so it should be avoided. As the study’s above indicate grass eating, in many cases, does not cause vomiting, so it could be the grass your dog is eating is contaminated causing the sickness or that your dog was sick before ingesting the grass. Remember that dogs that eat grass, which has been treated with chemicals, can end up becoming very sick.

As for my elderly dog, who loves to munch happily on healthy, pesticide-free grass with no side effects…I suppose he’s happy to munch and it’s not causing him any problems. Perhaps it’s his anxiety? Perhaps it’s his natural scavenger instincts? OR perhaps…just perhaps, he’s self-medicating for his arthritis? Who knows…the science and theories are still out there. This has however, prompted me to continue my research to see what the thoughts are in the holistic and behavioural field about our pets grass eating habits. Stay tuned!

For more reasons on why cats eat grass, visit the Factual Facts website.

Nadia Crighton is a well-known and accomplished Australian Journalist and pet magazine Editor. As a busy mum of four humans, two dogs, 50 sheep, three cats, a handful of chickens and a goat named Billy, she simply adores pets of all shapes and sizes. These are her personal thoughts and advice from many years of pet-ownership.