French Bulldog puppies are, without a doubt, the living definition of ‘aww!’ They’re playful, smart and oh-so quirky – traits that run within the Frenchie breed regardless of their age. However, before they mature, French Bulldog puppies do tend to have their own unique characteristics and quirks. In this blog, we’re going to run through the different traits of these pups and help you decide if this is the right breed for you.

If you’re more of a visual learner and are interested in knowing more about the French Bulldog’s history, living needs and trainability, we’ve linked an informative video by the AKC below: 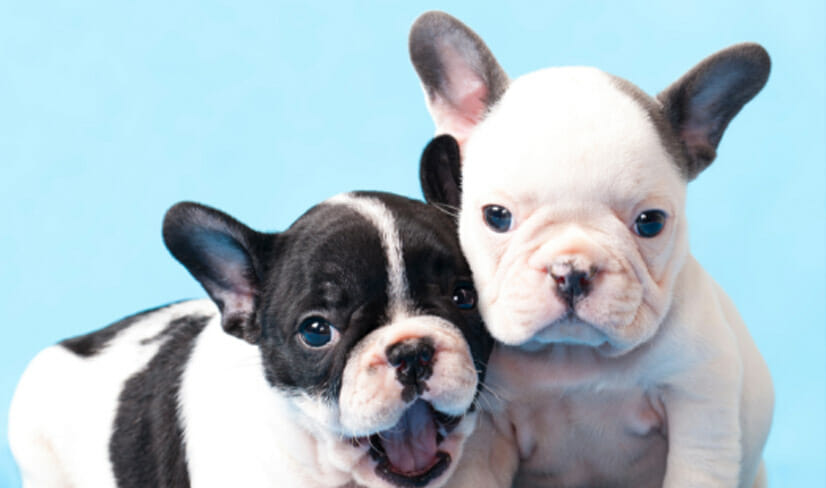 The Frenchie’s history, interestingly enough, began in England during the mid-1800s. Toy-sized bulldogs were a fan favourite amongst lace makers and were a dog breed thought to bring good fortune. When these lace workers moved to France after the industrial revolution, they took these dogs with them, eventually resulting in the French Bulldog breed that is cherished to this day!

Here are some fast facts about the French Bulldog’s history: 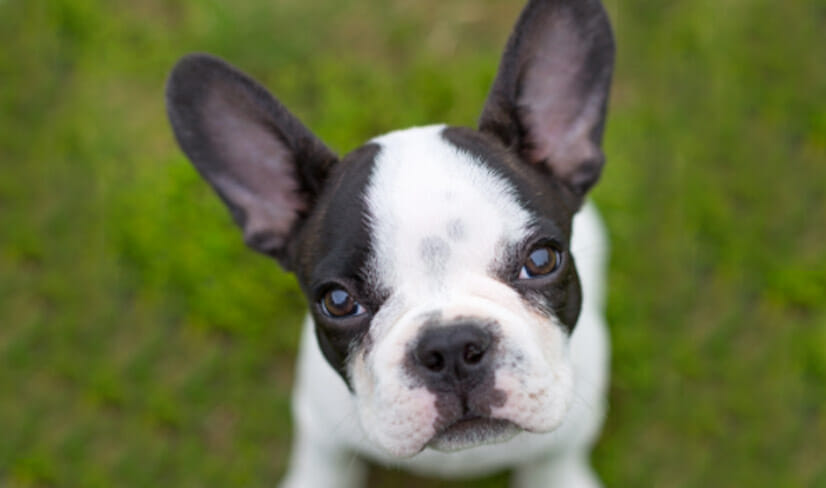 French Bulldogs, as a breed, are generally quite calm and playful. French Bulldog puppies, on the other hand, are fun-loving, energetic and curious. Puppies, like people, change as they grow up. It’s always recommended to take your puppy for training classes as soon as they’re ready for it – this helps them adapt to being social with other people and pets outside of their home environment.

Here are some of the key personality traits of French Bulldog puppies: 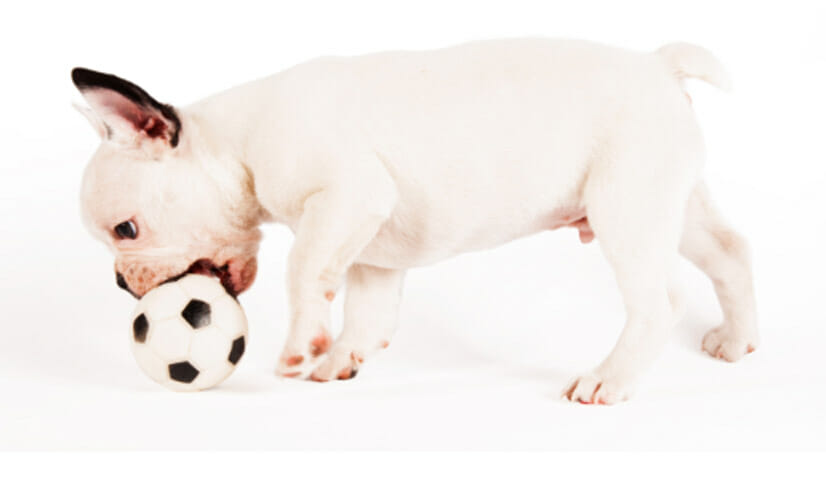 French Bulldog puppies don’t look too different compared to their fully-grown counterparts, although there are some slight differences. Males and females of this breed are roughly the same size and height, and they come in a variety of colours.

Here’s a quick run-through of the Frenchie puppy’s most defining features:

French Bulldog puppies’ coat colours are known to come in:

You can read more about the French Bulldog’s coat colours here. 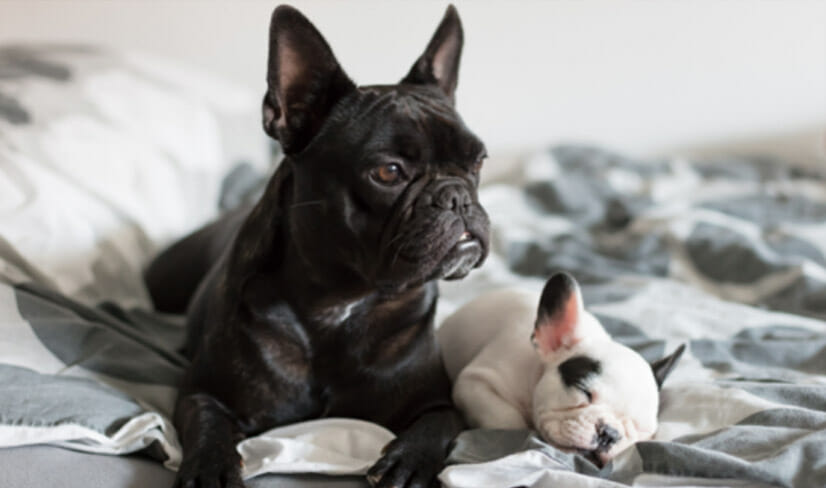 When it comes to looking at French Bulldog puppies for sale, it’s important to keep a few key factors in mind. When looking for French Bulldog Breeders in Australia, make sure to keep an eye out for:

You can find a list of responsible dog breeders here, and you can use this guide as a ‘checklist’ while looking for a trustworthy breeder.

Sometimes, it may be easier to go to a shelter when looking to adopt a French Bulldog puppy. Although shelters are usually made up of adult dogs when it comes to their purebreds, there are always exceptions. You should consider adopting through a shelter or rescue when:

You can have a look at a well-known French Bulldog shelter here, and other dog rescue programs here. 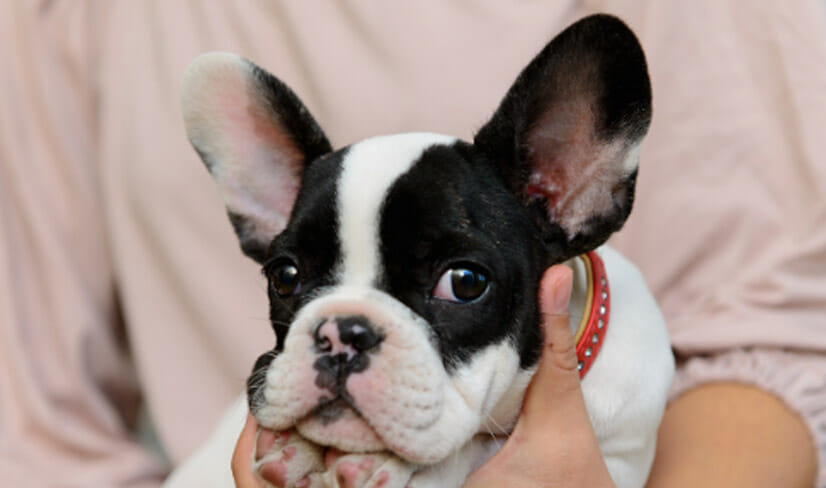 HOW MUCH DO FRENCH BULLDOG PUPPIES COST?

They usually range from between $3000-$5000, depending on the breeder as well as the colour of their coats.

Frenchie’s famous ears begin to perk up approximately from 5-15 weeks of their birth. Funnily enough, their ears may stand up at different times – making for a very adorably unbalanced puppy.

Frenchie Puppies can suffer from their breeds’ breathing problems and the build of their bodies. However, it is normal for your puppy to breathe more rapidly than adult dogs as they have a higher respiratory rate. French Bulldog Puppies can breathe more quickly, particularly when they are asleep, due to new and exciting dreams.

Should puppies be vet checked before buying?

All puppies should be checked by a vet in their first few weeks of being born. This can help catch any health issues early and avoid them developing into a worse condition. Most reputable breeders will ensure that the puppy you are buying has been checked by a vet.

How much does it cost to care for a French Bulldog?

How to ensure that I’m buying a healthy French Bulldog puppy?

Can French Bulldogs have puppies naturally?

French Bulldogs can give birth naturally, however, most pregnancies are medically assisted. The rate of natural birth for Frenchies is only 1 out of 5 occurrences. Natural birth can present risks such as the puppies being unable to exit the birth canal. It is recommended that you consult with a veterinarian for more detailed information.

What should I expect before I get a French Bulldog?

French Bulldogs are absolutely adorable – but there are some important things you should know about investing in this dog.

Are French Bulldogs Born with Tails?

Yes, Frenchies are born with tails! Since their tails are usually so short and small, many people think that their French Bulldogs have had them docked, but it’s completely normal. This trait can be traced back to the early development of the breed upon its arrival in France. 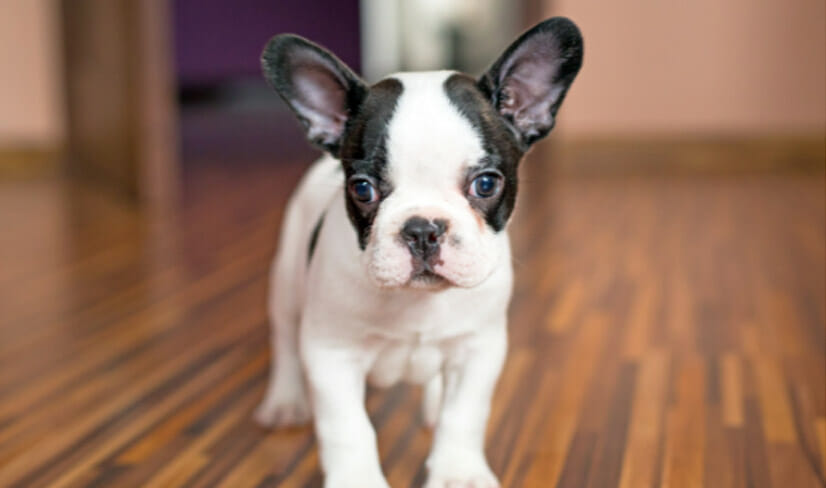 When bringing a new, living, breathing being into your care you should always be prepared! You can read a more comprehensive guide on French Bulldogs here if you’re interested in doing a little more research on this breed.

If you’d like to adopt a French Bulldog puppy, Pet Insurance Australia is the perfect place to get your dog insurance sorted! Contact us today for a quote, and we’ll look after your best friend, too.

This blog does not replace a qualified veterinarian’s medical expertise or advice. Please consult a registered veterinarian for further information on the blog topic. The material and information on this blog are for information purposes only. Please note that any linked websites or mentioned products are not sponsored affiliate links or paid endorsements. Pet Insurance Australia does not accept liability for any damages arising from your interpretation of the information presented on this blog. This includes Pet Insurance Australia not being liable for: any false, inaccurate or incomplete information on the blog; any damages that arise from technical issues on the website and the blog being unavailable; any damages from clicking through a link in the blog to a different website.